This is a quick note on the setup of Emacs on Mac OS X.

The simplest way to install Emacs on Mac is using Homebrew. Here is the commands:

If you want to try a patched Emacs with transparent titlebar, install as follows

(You may add --without-spacemacs-icon, if you keep only one version of Emacs.)

If you have run the Emacs, you can start an Emacs server by the emacs-lisp function (server-start). Then you could anywhere open files in or create a frame of this Emacs by emacsclient -nc. However, this is rarely used. An alternative way is to run Emacs as daemon

and open emacsclient in the same way.

In my Mac, I run multiple Emacs servers (each Emacs process as daemon is called one server) to allow using multiple color themes (e.g. I use a light theme for text editing like Markdown, LaTeX, and use dark themes for coding). The way to do it is giving each daemon process a name so as to connect to it later via emacsclient:

and later you could connect to them, e.g. the main server, by

To stop an Emacs server (the daemon process), you could call (kill-emacs) in any Emacs frame connecting to this daemon. Alternatively, use system command kill with process ID listed and grepped by ps aux | grep -i 'emacs --daemon'.

To quickly start Emacs as daemon, connect to and kill them, I wrote a bash script function emacs-server-func.sh on my github repository, which provides commands es, ec, ecc:

Alternatively, we could use Alfred.app to perform the same tasks. We need its PowerPack in order to build Workflows. Create an Input using Keyword, with the keyword es start (with Argument Optional, enabling with space), shown as 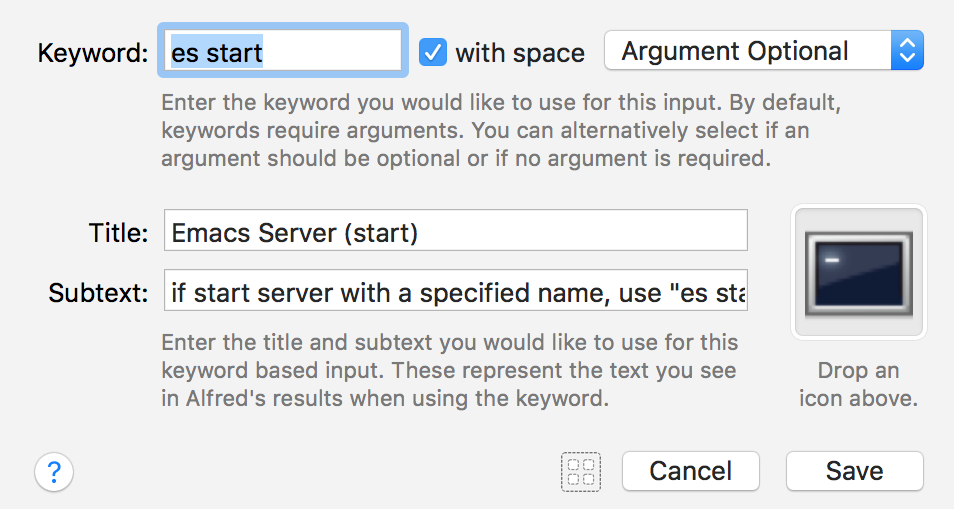 Then, connect to an Action of Run Script, in which choose bash and fill the following codes

Similarly create workflows for es stop, ec, etc. The scripts are the same as the codes provided in emacs-server-func.sh. We just copy and paste them into Alfred and create shortcuts to run them. The whole workflow looks as 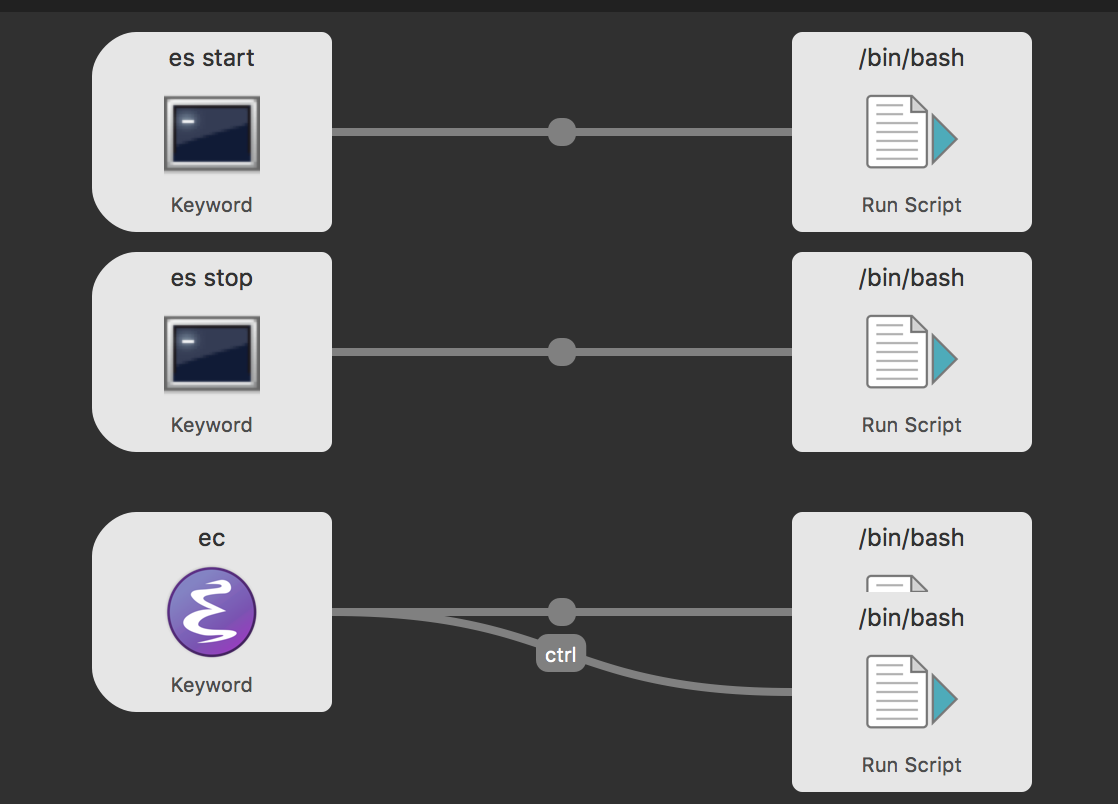 and you could find the workflow, named Emacs.alfredworkflow, on my github repository.

Since Mac OS X by default only allows one Emacs instance (not via daemon), we may use the follow code to open multiple ones, which is created as a workflow in Alfred triggered by em new:

Automator is a built-in OS X app for creating custom automated user workflows for just about any installed app you might have or even OS functionality. Suppose we could like to open files by default in the Emacs client named as main. You may open files in the Emacs.app, however, with too much user-defined configurations, it is too slow to be acceptable. Using the daemon mode and opening in clients are a better choice.

The following shows how to create an app that allows opening files in Emacs clients.

In practice, I prefer light themes for text editing (like Markdown, LaTeX, org mode) and dark themes for programming. To achieve, we run multiple Emacs daemon processes, e.g. main and coding. Now we will describe how to load different themes in your .emacs or init.el configurations.

First of all, we need to prepare a few variables and loading functions:

These functions are essential since the theme has to be loaded when the frame is firstly created, instead of when the elisp files are loaded during emacs --daemon.

Then we define different themes for each severs (the daemon processes), for examples:

where these constant variables are defined as follows in advance for convenience:

The last step is to load or reload themes depending on specific Emacs running modes: